You meet the nicest people in a cemetery 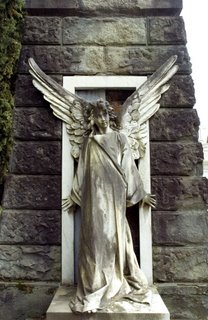 OK so you’re asking, why write about cemeteries let alone visit them? I mean, that’s pretty morbid isn’t it?

Well I suppose in some parts of the world anything connected with death must be avoided at all costs; but in Italy there is not only great respect for the dead but there is a concrete link between the living and those who have passed on. This is evident, for example, in the sheer number of flowers, fresh and otherwise that constantly adorn Italian cemeteries.
There seems to be a keen desire to share the memories of those who passed away, either through the use of photographs (very widespread) or, even more fascinating, through the use of sculpture to help the passer-by understand that this was a person of some fame, or a person who died young, or a person who was in love, or a person who died for the glory of his country or . . . well you get the point. 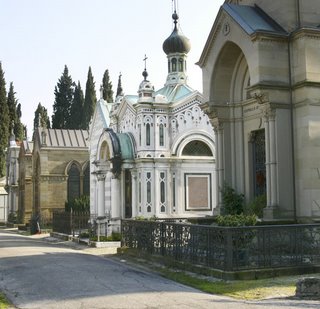 There is also a link with the past in yet another way, a link to and between the spirit of the living and the dead. In fact, there are Italian cemeteries such as Porte Sante and adjacent to the Basilica of San Miniato and Trespiano some four miles northwest of the city, which are linked to the famous Etruscan necropoli. Built more than 2500 years ago those Etruscan “cities of the dead” housed not just the remains and the spirits of their dead but also the spirit, the very essence of their culture, their world. Today as you stroll down “streets” of Porte Sante, flanked by “houses” made of stone and marble, in a variety of fantastic architectural styles, you cannot help but feel that you are a witness to a direct connection between what you are seeing and those “houses” of death which once lined the Appian Way, themselves a continuation of the Etruscan view toward the vitality of maintaining a life spirit after death.

And another thing that makes many Italian cemeteries like Porte Sante and Trespiano worth a stroll on a beautiful spring afternoon: there are no lines to stand in for these artworks. You can stand and take it all in at your own pace. Moreover, each piece of artwork comes with a very real human-interest story. There are the war heroes, the artists, the rich and the very rich, the one-time great noble families, the teachers, the visitors, they are all here and many wanted to leave a bit of themselves behind so that you, a passing stranger will know a least a small part of their story. So we find a bit of marble or stone chiseled, sculpted, created and placed in such a way as to help you understand who they were, those long-dead men, women and children. 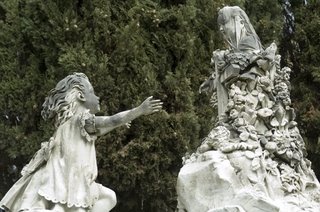 Take Emma and Bianca Marchesini, two sisters, who both died very young sometime in the early 1870s; the older sister died first followed soon after by her little sister. The statue shows the older sister veiled and standing behind the cross on her grave looking down at her younger sister who is running toward her with her arms outstretched.

Or the Sembranti brothers, both of whom died during the First World War while fighting for their country. The surviving family wanted you to know just what their sacrifice was all about and the statues represent them in their uniforms with the bust of Ubaldini resting atop a female figure representing perhaps Italy, the motherland. 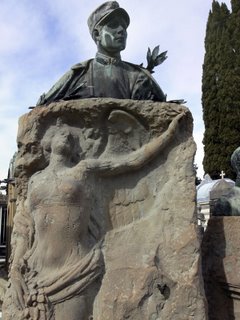 Then there’s the Cappella Lorenzini. Known simply by his village name “Collodi”, Carlo Lorenzini is known by children and parents around the world as the creator of that little wooden puppet, Pinocchio. His little chapel is still filled with fresh flowers. And there’s the small bust of Pellegrino Artusi, the father of Italian cookbooks.

And then there’s Mario and Maria Mazzone. The life-size statues of these two young people who died so very long ago make even the most casual observer stop and look for details of this “love” story. One sees a young man in an airman’s uniform with a broad smile on his face looking squarely at the young woman whose gaze is turned slightly aside, and downward, with just a hint of a smile on her face, their hands just about to touch. One looks closely and reads in the inscription that Mario, born in 1919, was killed in Hamm, Germany on 22 April 1944; Maria, born in 1922, died some 11 months later, in May of 1945. No other Mazzones are buried there nor are there any clues as to who these people were? Were they lovers, husband and wife, what? And what was Mario doing in Germany some 10 months after Italy switched sides? Was he killed during the US bombing raid on Hamm on 22 April? And what about Maria? Did she die of a broken heart? In fact, according to Graziella Cirri, who has done an exhaustive analysis of the sculpture in several Florentine cemeteries, Maria and Mario were in fact brother and sister and the statue was commissioned in 1947 by their mother. 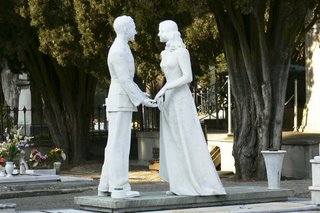 There are 17 cemeteries operated by the city of Florence, not including those burial grounds which are generally closed to the public, or are privately owned and maintained, for example the Jewish cemetery on Viale Ariosto, the Misercordia cemetery on Via degli Artisti or of course the “English” cemetery on Piazzale Donatello, the final resting place for Elizabeth Barrett Browning. (See my blog entry on the English or Protestant cemetery as it’s also called, just scroll down to "Valentine's Day.") And of course these don’t include the most famous Florentine burials in the churches of Santa Croce and San Lorenzo.

My personal favorite is Porte Sante at San Miniato, in part because it overlooks the city of Florence and but largely because it has the largest outdoor collection of sculpture I've seen so far. (Via S. Salvatore al Monte 34). 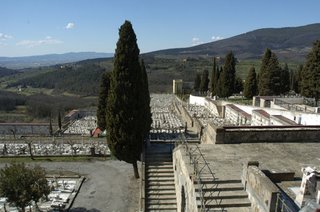 As the first “city” cemetery, Trespiano was created in 1784 as a result of a new law prohibiting the burial of anyone inside the city walls – it was deemed too unhealthy. But according to one source only the bodies of the poor received burial in Trespiano while the wealthy continued to use the old cemeteries. Trespiano eventually became the city’s primary burial ground, however and remains so to the present day. (it is an enormous cemetery and although lacking the monumental flair of Porte Sante it does have a large burial ground for the “Garibaldini” as well as a huge “Potter’s field” and a large military section.)

In 1854 the cemetery of Porte Sante was created on the grounds adjacent to the Basilica of San Miniato and quickly became the burial location for the wealthy and well-known Florentines and indeed the monuments reflect both their wealth and status.

If you're interested you can see additional photos on Porte Sante and Trespiano.

An excellent guide to five cemeteries with unique sculpture is Guida ai cimiteri Comunali di Firenze, by Graziella Cirri, Firenze: Edizione Polistampa, 2003. Ms. Cirri analyzed the sculpture of San Felice a Ema, Settignano, Rifredi, Trespiano and Porte Sante at San Miniato. In Italian. With very handy maps and notations where each statue can be found.

Hours for Porte Sante and Trespiano as well as the other cemeteries operated by the comune are:

Porte Sante is 20-minute walk from Piazza della Signoria; about half of it is uphill.

To get to Trespiano, take the no. 25 bus from Piazza San Marco, and get off at the cemetery bustop. 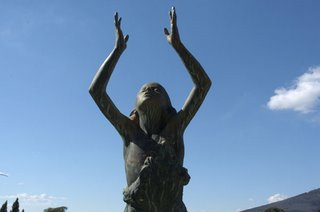